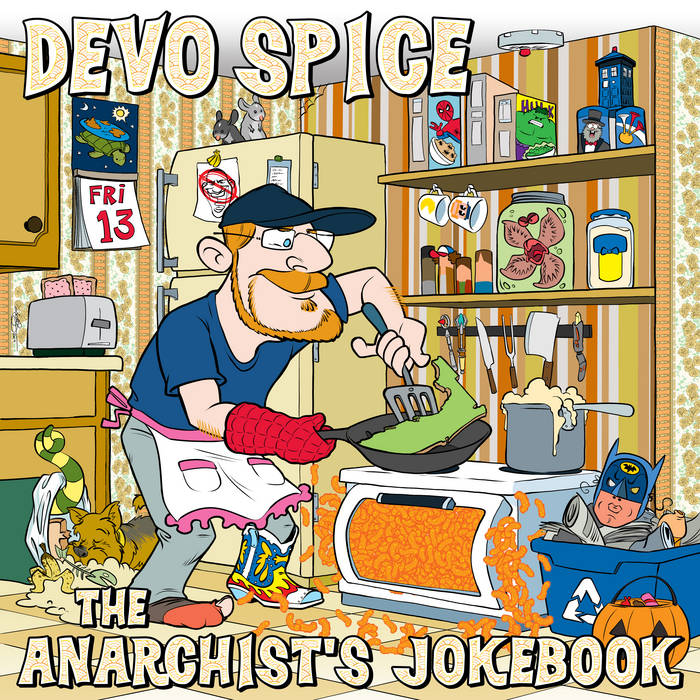 Devo Spice proudly presents his latest collection of hip hop absurdity. The Anarchist's Jokebook features an hour of the funniest and funkiest rap songs Devo Spice has ever produced.

This release features 16 tracks of hilarious hip hop including the Logan-Award-winning "Just for You" and the B.o.B parody "Nothin' but Truth" which made Dr. Demento's Funny 25 countdown in 2016.

For the Doctor Who fans this album features a brand new song focussed on Peter Capaldi's tenure as the legendary Time Lord titled "The Promised Land." And for the Spider-Man fans this album features an epic group jam about Into the Spider Verse called "Spider Verses" which features Creative Mind Frame (aka 1-UP), Insane Ian, Bonnie Gordon, TV's Kyle, LEX the Lexicon Artist, and the great Luke Ski each taking a verse as a character from the award winning animated feature.

This album also features three Stupid Rap Battles with guest appearances by Insane Ian, Starf, and the great Luke Ski, respectively, a 1983-sounding rap about the Netflix show "Stranger Things," and, of course, the fan favorite "Dinky McDiddlyboots." In all there are 16 tracks, including five parodies, clocking in at just over an hour of great music.

In addition to the main album you also get an entire bonus album titled Appendix A which features 18 additional tracks; that's another hour of music. Appendix A includes things like "The Ditch Diggers Theme" from Mur Lafferty and Matt Wallace's Hugo-winning podcast, "What's Really in my Hot Dog," Devo's answer to Steve Goodie's song, and "The Laundromat of Sin," Devo's cover of the Worm Quartet classic.

It also features songs by other artists which feature Devo Spice as a vocalist including "We Want The FuMP" by The FuMP and "Ghostbusters" by Insane Ian. Plus Luke Ski's cover of the old Sudden Death song "Brain Dead," Devo's live appearance on 2d6's "Heh, That's Actually Hilarious" at FuMPFest 2016, and "Doctor of Gallifrey," a Doctor Who parody that Devo wrote for Marc Gunn.

And there's even more! In addition to Appendix A, you also receive download links for Appendix B and C which feature artist's commentary by Devo Spice about each song on The Anarchist's Notebook and Appendix A, respectively. That's another two hours of content.

Music by Devo Spice, with help from Chris Mezzolesta and Bonecage.

Mixed and mastered by Devo Spice.